One of my PhD students, for who I am a co-supervisor, has just finished the defense of her thesis titled “Methods for Sensor Based Farrowing Prediction and Floor-heat Regulation: The Intelligent Farrowing Pen“. I would like to congratulate Aparna with her PhD title and for a good thesis and presentation at the defense. I have included the thesis summary below.

Piglet mortality is a current issue in the pig production and the large variability between herds suggests a management component to the mortality. Studies show that the mortality may be reduced by the supervision of farrowing or through climate regulation in the farrowing pens. However, this is possible only if the farrowing time is known and thus provides sufficient time for the management to make and execute the decisions. The gestation period of a sow is approximately 115 (SD=2) days. However, an initial cost-benefit analysis recommended increased precision in the prediction of farrowing to make the increased management efforts cost-effective for the pig producer. Recently, a wide range of sensor technology have become available to monitor the behavioural and physiological changes of sow. Evidence show that appropriate utilization of sensor technology may increase the precision of prediction of onset of farrowing. Prediction is feasible only if the prediction is online and automated.

The thesis is focused on constructing a system that can give predictions about the expected time to farrowing of individual sows based on automatic sensor recordings such as water consumption, video based activity measurements, and photo-cells based activity measurements. The warnings could serve to activate the floor heating system to ensure a sufficiently high temperature for the new born piglets, as well as to help the farmer to organize extra surveillance around farrowing. The thesis is based on three submitted manuscripts, describing the system at different stages.

The kernel in the thesis is a Markov process with four subsequent states Before Nest-Building Nest-Building, Resting and the absorbing state Farrowing; the states were selected based on ethological knowledge about sow behaviour. However, the sojourn time distribution in each state is not exponential. Therefore a continuous time discrete state semi-Markov process based on a Phase- Type distribution (in this case Erlang distributed) was formulated. Finally, the Markov process was transformed to a discrete time process. A Hidden Markov Model (HMM) was used for this process. The model is called Hidden Phase-type Markov Model (HPMM), and the time steps corresponded to each updating with sensor information at which the time to farrowing was predicted. The first paper describes and validates the use of the HPMM model for predicting the farrowing time based on an experimental data set of more than 30 sows. The second paper describes the estimation of model parameters (transitional parameters and parameters for the distribution of the sensor measurements conditioned on the state of the sow) using an adaption of estimation methods for Hidden Markov Models. The final paper demonstrates how to formulate the floor-heat regulation problem as a Partially Observable Markov Decision Process (POMDP), by supplementing the farrowing process model with a model for floor heating, a model for mortality model, and the relevant utilities. Approximate solutions for POMDP was found using so called greedy strategies (e.g. QMDP) and their rewards were evaluated against ’no-heating’ strategy and a simple heuristic strategy.

The tools for the prediction of onset of farrowing, estimation of HPMM and optimal decision making provides a framework for handling a large amount of sensor data available and gives an overview of how to integrate information from several sensors on the pen level. The complexity of the models imply that the prediction algorithm and decision tool may be run on the herd level computer; whereas the parameters were estimated on the central level computers. Hence, the application is quite promising in precision livestock farming with the necessary customising for the end-user. 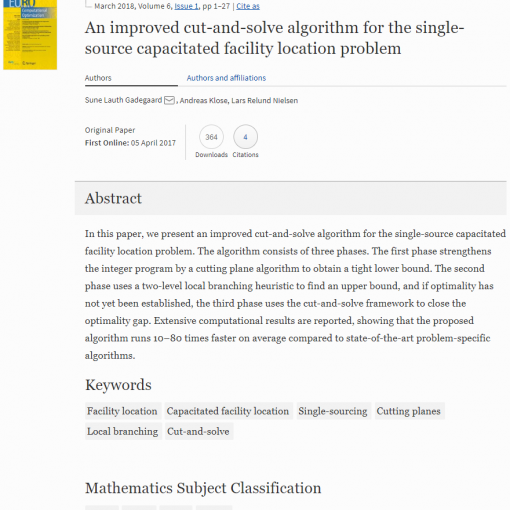 Today I am participating in a kick-off meeting of the project ‘The intelligent Farrowing Pen’. The four-year project is supported by Højteknologifonden, […]

The research paper “A bi-objective approach to discrete cost-bottleneck location problems” have been published in Annals of Operations Research. Abstract: This paper considers […] 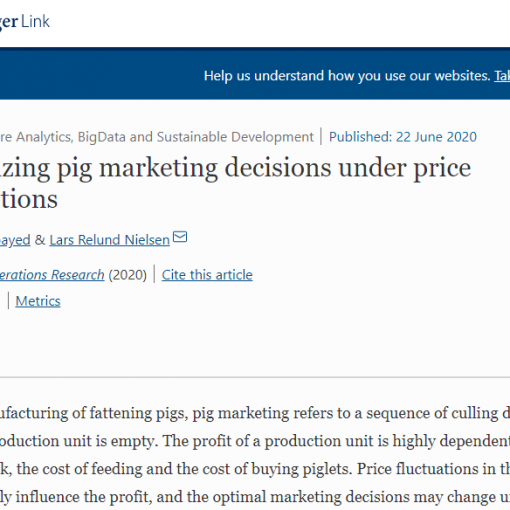 The research paper “Optimizing pig marketing decisions under price fluctuations” have been published in Annals of Operations Research. Abstract: In the manufacturing […]